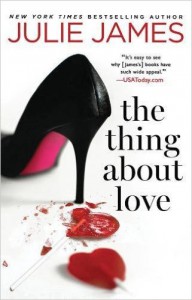 The Thing About Love - Julie James

THE THING ABOUT LOVE is such a great enemies-to-lovers story. Julie James sure knows how to write Contemporary Romance.

John and Jessica have history together. They were in the FBI academy together and became enemy number one to each other. Fast forward several years and as luck would have it, they are being put together in an undercover operation in Florida that has them in some close quarters. They may not like each other but it doesn't mean that they can't appreciate how hot the other is.

Spending a lot of time together turns up the heat and also clears up so long ago misconceptions. But, when the case is over, so is their relationship. Or so they think.

I really thought this was adorable. John and Jessica were total frenemies. It was funny to see how the other viewed how things went down between them when they were in the academy. It's a shame that they lost that time thinking poorly of each other when if they had just talked, they would have saved themselves a lot of misery. But where would the fun in that have been?

I wanted to bop both of them on the head because they just couldn't see the forest through the trees when it came to their relationship, but I'm so glad that they figured it all out in the end.

THE THING ABOUT LOVE is loosely related to the FBI/US Attorney series but can easily be read as a standalone. Some previous characters make small appearances in the book, but you don't need all the history to enjoy this story.

I hope we continue to get more books out of this FBI/US Attorney world because I just love the stories and characters that come out of it.