Such a Great Series 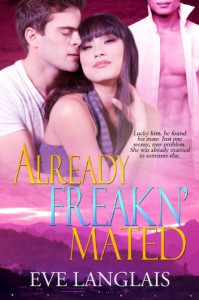 If you haven’t read the Freakn’ Shifter series before, you’re really missing out.  ALREADY FREAKN’ MATED is book three in this series and while it can be read as a standalone, I think starting from the beginning will make the experience of reading this one all the more better.

This book is the story of Chris Grayson who’s already seen his sister and older brother mated into happy triads.  While that may be ok for them, he refuses to share his mate with anyone once he finds here.

Imagine his surprise when he shows up at  job to find that he’s found his mate and she happens to be married to someone else!  He’s not sure what he’s going to do, but he’s positive that his mate will be his eventually.  What he doesn’t know that his mate, Jiao, is hiding big secrets, and being married is probably the least of them.

This was the same classic fun that I’m used to with Eve Langlais but it had added intrigue, mystery and action that was new. Also, it really had two story lines going on in the same story although the one with Chris and Jiao was in the forefront.

I’ve truly fallen for the Grayson clan, and I can’t wait to see what’s going to happen next with them.